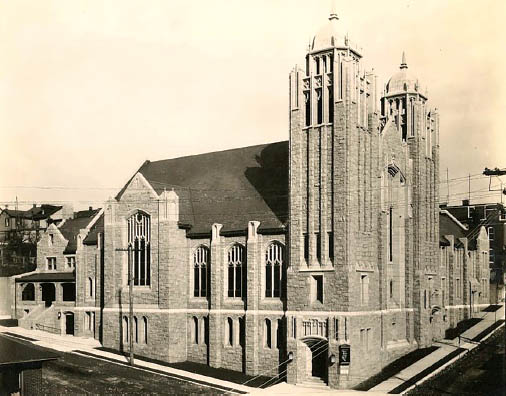 This early image (date unknown, likely circa 1930) shows the church shortly after exterior construction. Note the two lanterns on the top of the towers, which have since been removed.

Set into a hill overlooking the historic industrial town of Tamaqua, Pennsylvania, Zion Evangelical Lutheran Church, with its striking twin towers of granite, limestone, and cast concrete, is an iconic part of the community that recalls the fortunes and decline of the now post-industrial town. Started in 1925, the Great Depression and then World War II halted work. The congregation met in the basement for two decades until the interior was completed in 1948. Zion’s interrupted construction resulted in a blending of Late Gothic and Art Deco influenced exteriors with Midcentury interiors in a way that is as unique as the community that built it.

Like thousands of other congregations, Zion is navigating shrinking participation and a deteriorating building. In 2015, large pieces of the facade began falling onto the sidewalk and street below forcing the congregation to immediately confront questions regarding their future in their worship space.

“Should we stay or go, and should we fix it? That’s when that conversation started,” recalls Mark Valentine, chairman of the property committee.

For many lifelong congregants, the building literally grew as they did and so was infused with a strong link to identity. “Leaving was out of the question,” said Pastor Cindy White, rector of the congregation. “It is a beautiful piece of faith and hard work. It would have been devastating. There’s so much history here and so much love.”

Resolved, the congregation launched an ambitious $1 million building project to restore the church, but efforts have been slow. Banks did not want the risk associated with investing in a building type that is both expensive to maintain and hard to sell. Meanwhile, community members, like a growing number of Americans, were largely disengaged from the church and did not immediately come alongside fundraising efforts.

“Too many churches circle the wagons and go into survival mode which seals their doom,” opined George Taylor, a member of Zion’s Outreach Committee. “The churches who survive are the churches who reach out to the community.… There is a great deal of love for this building, but the church is not the building, it is the people in the building.” A digital construction of the south façade produced through combining and rectifying images showing completed restoration on the west tower (right) compared to incomplete or ongoing work elsewhere on the structure.

But that building needs to be safe for the community, and past efforts arguably made problems worse. From well-meaning members applying inappropriate repairs, to professionals who did not respect the material properties of a historic building, the church struggled in the past with interventions that either failed or exasperated existing conditions.

“We got bad information and did a lot of things that were detrimental to the building—I mean sealing the building, putting coatings on the outside that did not allow moisture to escape and eventually…we had chunks of stuff falling all over the place,” Taylor recalled.

For this round of renovations, leadership wanted things done right. Their structural engineer recommended deGruchy Masonry Inc. of Quakertown, Pennsylvania, a historic restoration masonry company with three decades of successful work on historic structures including many churches.

“I’ve been here since the beginning and it’s been exciting watching deGruchy put all the pieces together so we could have lasting reconstructive benefits,” said Pastor White, “This has been a holy place for over 100 years now, and they treated it as such.”

Repairing the cast stone details of the church’s exterior ornament required a creative solution. Popular during the early 20th century, cast stone made from Portland cement was hailed as a cheaper alternative to cut stone. But as a relatively new material with few regulations, the quality of cast stone varied widely even on one building. Combined with years of deferred maintenance or inappropriate repairs, Zion’s cast stone was not just deteriorated, but dangerous. A view looking north down the nave of the sanctuary showing the blending of early and mid-20th century architectural and ornamental styles.

After removing unsalvageable areas, deGruchy Masonry used St. Astier Lithomex, a French natural hydraulic lime-based resurfacing mortar successfully used in Europe for almost thirty years. The decision to use Lithomex, as opposed to cast stone or other repair mortars, was the low cost, ability to replicate detail, and material properties. More vapor permeable and less dense than Portland-based products, Lithomex draws moisture away from the historic stone and remaining cast stone to ensure water is transferred out of the building instead of into it. Restoring lost details and preventing moisture damage to the interior were top priorities for the congregation.

As scaffolding came down, results were striking. Missing details were restored, and an impression of the building lost to time reemerged. “When the west side was completed, I cannot tell you how many people in the community stopped by,” shared Pastor White, noting that the restored bright white details make the building shine in sunlight as originally intended. Before (left) and after (right) the Lithomex repair of a limestone trefoil on the eastern façade.

Through creative use of restoration materials and energized outreach to their community, Zion Evangelical Lutheran Church is transforming their decaying castle into the shining beacon on a hill it was intended to be. They now understand the architecture of their building is not just worth saving because it is historic, but the true value of the space comes from how it helps contribute to a communal identity in Tamaqua.

“George Washington didn’t sleep here,” Taylor reflected. “Our history value comes from our place in the community…. We have value from the overall culture of Tamaqua.”

Before (left) and after (right) the Lithomex repair of a cast stone shielded two cusp foil on the southern façade.

EDITOR’S NOTE
Fundraising for the restoration of Zion Evangelical Lutheran Church is ongoing, with approximately two-thirds of the work yet to be completed. For more information, or to support Zion’s restoration efforts, please visit:
https://www.ziontamaqua.com/capital-campaign/

AUTHOR NOTE
Anthony Hita is an ordained elder in the Western Pennsylvania Annual Conference of the United Methodist Church and an architectural conservator working for LimeWorks.us in Telford, Pa. Perspective of the east and south façade showing the ongoing restoration work. The west tower (right) has been restored, while the east tower (left) has not.