The Gift of Reborn Sacred Space

In the fall of 2015, the sanctuary of Temple Tifereth Israel resounded with the music of Beethoven, Schoenberg, and Mendelssohn played by the Cleveland Symphony Orchestra when it was introduced as Silver Hall, a new performance space for the city. The prominent synagogue, a long-standing focus of the city’s Jewish community located at the edge of the urban campus of Case Western Reserve University, had been transformed into the Maltz Performing Arts Center, created to feature the university’s growing commitment to programs in music, theater, and dance. To arrive at that moment, the renewal of the building faced performance, acoustic, aesthetic, and cultural challenges to preserve the building while redefining its purpose.

Designed by architect Charles Greco of Boston and completed in 1924, the synagogue was registered as a National Historic Landmark 50 years later. The narrow triangular site acquired by the congregation shaped the concept of a seven-sided polygon for the landmark buildings including the Cleveland Museum of Art, Severance Hall, and other institutions that shape the cultural life of the city.

Milton Maltz remembered the synagogue from his youth, saddened by its decline and disuse as the congregation’s focus moved to its suburban campus. He forged a vision for the future of the building with Barbara Snyder, President of Case Western Reserve University, and Rabbi Richard Block, the congregation’s spiritual leader, that would fill it with new energy, yet retain its occasional use by the congregation for high holidays. Together, they saw the new purpose as a way to contribute back to a city that had nurtured the growth of an immigrant community, opening its doors for the arts and unifying the people of Cleveland around the universal connection to music. When Temple Tifereth Israel was built, Rabbi Abba Hillel Silver was a powerful man who could fill the sanctuary with his voice. His messages (and those of his son, who succeeded him) still resonate in the memories of the congregants. However, the porous Guastavino tiles that cover the walls and ceiling of the heptagonal, 1,400-seat space are not as well suited for the rich sounds and nuance of instrumental music. Moreover, without a significant intervention (particularly at the inner dome) the acoustical character of the original room could not direct high-quality musical sound from the stage to the audience. A composite design approach was required that coated the tiles with an acrylic polymer for more reflectivity, and added adjustable side wall panels and an acoustical canopy.

On a typical Sabbath service, the focus was on the Rabbi and the Torah, so the bema was relatively small for the large capacity of the sanctuary. Now that the space was to be used primarily for performances, the original bema would be effective for a small chamber group or jazz ensemble, but not for an orchestra or a choir. Through complex selective demolition and structural underpinning, the new stage offers flexibility for different productions with hydraulic lifts to create a variety of sizes. The resulting effect is especially engaging because the audience is in the same space as the players, without a proscenium arch between them. 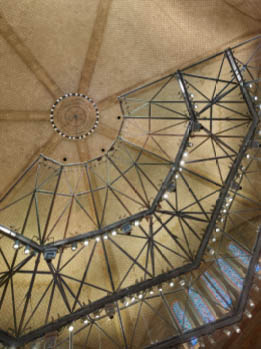 Detail of the steel and glass acoustical canopy suspended from roof structure above the tile dome.
Photo: © Halkin Mason Photography

It was possible to unobtrusively integrate many modifications to the sanctuary that are required for a contemporary performance, such as selected sound distribution, lighting, microphones, speakers, video, and controls. The necessity for an acoustic canopy presented the opportunity to introduce new architecture that would be equally powerful in character to that of the original space. To juxtapose the heavy masonry and textured surfaces with this new feature, a diaphanous folded spaceframe of steel and glass floats in the dome, its members balancing tension and compression in resonant contrast to the deep gravity of stone upon stone. Each would define the other in presence and in form.

What strength of character does it take for a community to build a landmark? Perhaps it is faith—not in the strictly religious sense, but in the recognition of what lies ahead as they commit to the value of the structure that they invest their treasure in. In Cleveland there was a gift exchange as the congregation left its synagogue and memories to the university. Perhaps the gift was that of faith, and the building as the token of it. View from the balcony in Silver Hall of the revived performance space, with new glass and steel acoustical canopy above.
Photo: © Halkin Mason Photography

A wonderful exposition on this subject comes from Lewis Hyde and his book The Gift. In it, he describes the cardinal property of a gift: Whatever is given is supposed to be given away again, not kept. The value of a gift lies in its use; it must always circulate, or something equal be given in return, if it is to retain its value. Naturally this idea extends to the musician who, blessed with talent to revive another’s spirit, repays their gift with performance. In this sense, the synagogue has maintained its consecration because its gift of faith has been passed to others, its reason for being reaffirmed.

Opening night featured not only a revived building, but also 18 violins that had been played by Jewish prisoners in Nazi concentration camps, later faithfully restored to make music again. After the concert, many former congregants remained, to quietly survey the transformed sanctuary, searching in reverie for memories. They were genuinely appreciative of the canopy’s new architecture and the artistic and acoustic resonance it had achieved. However, their fingers lingered over the original surfaces—the modeled tiles and the smooth oak panels—as all of us might do when we reflect on our own presence: How does the beauty of this place become me?

About the Author: Guest Contributor